What is dynamic licensing

We’re offering all existing customers that have EasyMorph Server and/or more than 10 users to migrate to the new dynamic licensing. Some of our biggest customers have already migrated to dynamic licensing. Now they can assign and transfer user licenses on their own, without sending requests to our support.

The current licensing model requires a license key file to be sent to and installed by every EasyMorph user. The license key is usually valid only for 1 year therefore, once a year, it needs to be replaced by every EasyMorph user at your organization, which is inconvenient and doesn’t scale well when the number of users grows. Also, currently transferring a license requires sending a request to our support, which is inconvenient and makes tracking changes and actual usage difficult.

The new dynamic licensing makes it possible to do all license management via EasyMorph Server (installed on your machine). You can assign licenses to users and transfer them between users in a self-service manner without sending requests to our support. Also, dynamic licensing simplifies renewals because users don’t have to do anything – their licenses will be renewed automatically when a renewed license key is applied on your EasyMorph Server. Finally, dynamic licensing allows you to know exactly how many users actually use EasyMorph, so you can reassign licenses of inactive users instead of purchasing new ones and therefore have better control of licensing costs.

Configuring license assignments on EasyMorph Server is described in the Admin Guide, chapter “Leasing licenses to Desktop users from Server”. If you don’t have it around, go to the Licensing tab and assign licenses from a license pack to user accounts as depicted below: 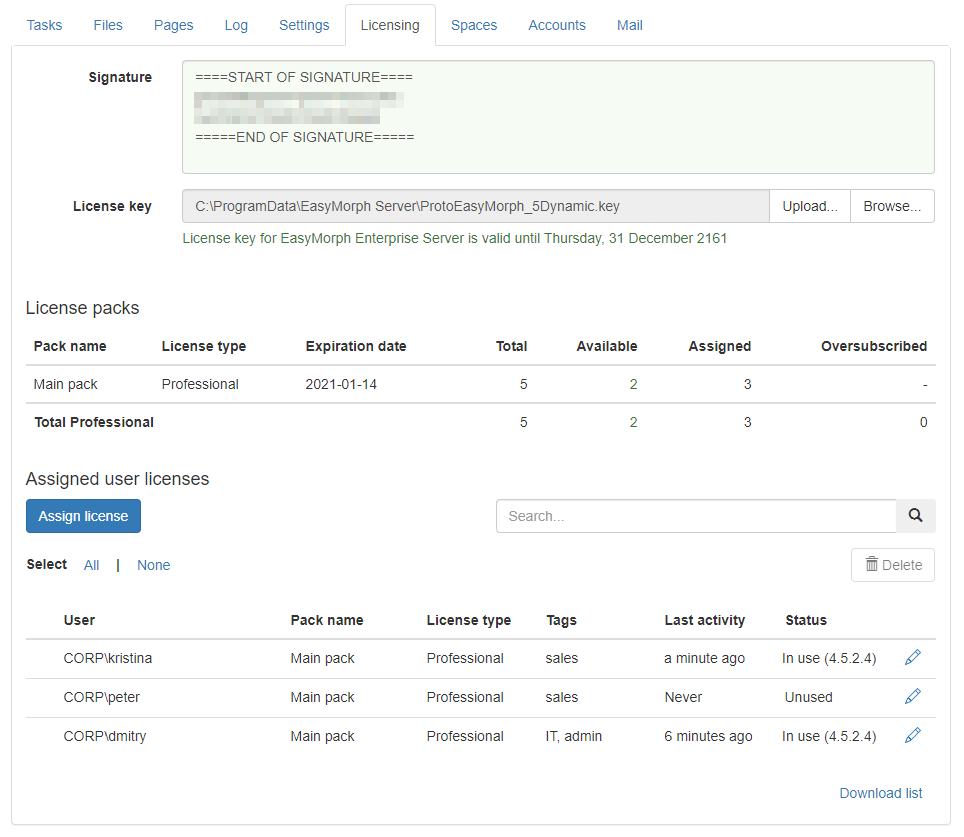 If you don’t see license packs in the Licensing tab, it means your license key doesn’t have dynamic user licenses.

PS. A note on the “Dynamic” name. I have to admit, this name can be a bit confusing and I should’ve thought better when choosing a name for it. It might appear as if EasyMorph Server can automatically assign N licenses to K people even when K > N and then automatically de-allocate licenses from users that don’t use them for some time. In reality, all assignment and de-allocation is manual. I called it “dynamic” to distinguish it from the old “static” licensing in which every user signature is hardcoded in the license key and any license transfer to another user should be done via our support. Probably, “self-service” could’ve been a more precise name instead of “dynamic”.

Ask to change to dynamic licensing must be made by mail to support ?
We can change with only EasyMorph server and 2 users ?

Have a nice day

Ask to change to dynamic licensing must be made by mail to support ?

Yes, send a request to our support.

We can change with only EasyMorph server and 2 users ?

Yes, you can switch to dynamic licensing with even 2 users.