Hi, I would like to make incremental extracts via ODBC.
I can’t find a standard feature of easymorph that supports this.
Is it possible to find the latest date that is already extracted, store this in a parameter and use this in a select statement to collect the new rows from ODBC?
In other words, how can I select the latest date from a table and write that to a parameter?
Thanks in advance!

Hi Ruben and welcome to the Community!

Incremental updates are surely possible in EasyMorph, but there is no “tick a checkbox” feature for it. An incremental update workflow has to be constructed. I’ll make an example and get back to you.

It would be nice if one day it could be a standard feature of EasyMorph.

@rdevroome: maybe you could consider change data capture on the database to track inserts, update and deletes automatically.

@dgudkov thank you, an example would be really nice.

@reynsnivea, it’s a very big table with a lot of transactions that also grows pretty quick.
I have to do some check on some field anyway to see where I stopped last time.

Here is an example of incremental load. It has 2 modules: “Generate rows” and “Incremental load”. There is also a helper module that queries database.

The example works as follows:

Module “Generate rows” generates in a databases (empty DB comes with the example) random data points with timestamps that differ from each other by 1 minute. The logic of the module is pretty much self-explanatory so I won’t explain it much.

Module “Incremental load” reads these data points incrementally from the database. It works as follows:

How to use the example: 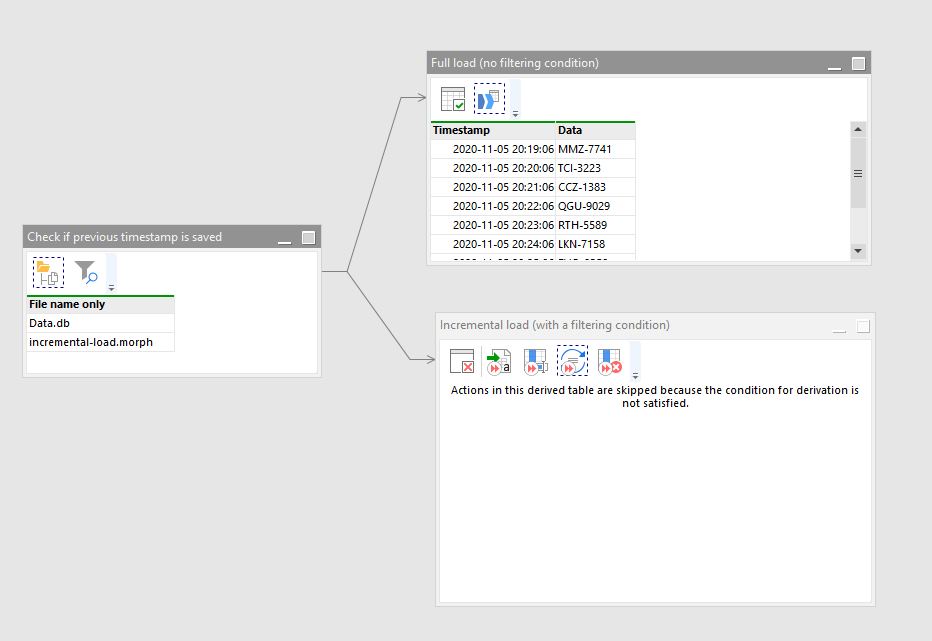 Thanks for this!
I will have a look at this the coming days.

Other question, is there a simple way to write the result of a query into a parameter value?

Other question, is there a simple way to write the result of a query into a parameter value?

You can do that with the “Iterate” action. It assigns parameters of the called project with values from columns. Keep in mind that it’s a loop action - it will call the iterated project as many times as there are rows in the current table.

Hi @Juan_Francisco_Carre and welcome to the Community!

Please post in English, that’s a rule of this Community forum. Thank you for understanding.

@dgudkov Hello, I am migrating tables to EasyMorph, how can I create incrementals so that my tables are automatically updated every certain time. Thank you

@Juan_Francisco_Carre, check out my answer earlier in this thread:

A post was split to a new topic: How can I read a bucket in S3