I am trying to replace a manual process where i am copying data from an excel file to a sharepoint list manually.
I was able to set up the process for reading the file then mapped all the columns in Easymorph from the Export to Sharepoint list action.
The problem i have is that, when i run the export, all fields are copied except one where the column type is “lookup”.
When i perform the action manually i just edit the list in grid view and paste the contents without issue.
Is there a chance anyone else might have encountered this error before and if so, is there any change needed in sharepoint ?
The account i am running the automation from has edit access for the Sharepoint site that contains the lists.

Maybe, there could be some workaround - does your list really need to have a lookup column (e.g. to create a link from one list to a cell in another)?

Hi @olysak
Ok, that answers why i was unable to correctly update. I cannot change the current setup unfortunately, or better said, it’s not so easy to change. I can set up a new list and upload to that and then use power automate to transfer the data but it’s also not optimal.
If i remove that vlookup column i will need to change several other flows and lists causing more work than just keeping to the current manual process.
Is there a chance that any plans exists for future functionality that would allow exporting to lookup columns ?
Thanks again for your reply !

We’re looking into it.

For now, if you don’t mind some tinkering, you actually can do the export to the Lookup columns by specifying the linked row IDs in the lookup column by hand.

The ‘lookup’ action in EasyMorph could be of help here. For example, suppose you have a table with a lookup column lookup to self that points to a Title column in the same table:

Upon import in EasyMorph this table looks like this:

For Sharepoint export to work, you need to modify the dataset and replace values in the Lookup to self column with respective linked row IDs, so the table should look like this:

You can do the ID substitution using the Lookup action by specifying Title column as one that needs to match in our example: 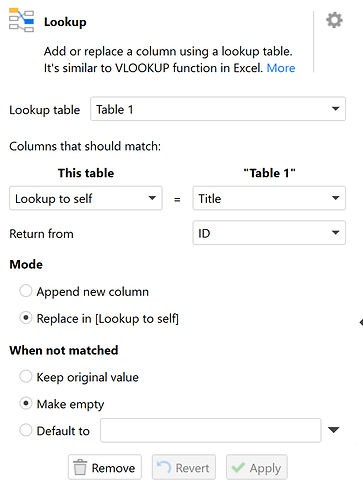 Note that if you need to make a reference to some row IDs you don’t know beforehand (for example, these rows are actually created by the export process now) you’ll need to split the process in two ‘passes’, first exporting all the data except lookup columns and then doing an update pass to set IDs in the lookup columns.

We’ll see if we can add support for linked columns in v5.4. Doesn’t seem too complex upon initial look.

And thank you for your replies and information ! I will try to see if i can follow the recommended solution until v5.4 comes out.
Thank you again for the help !

Support for linked (lookup) columns has been added in 5.4. 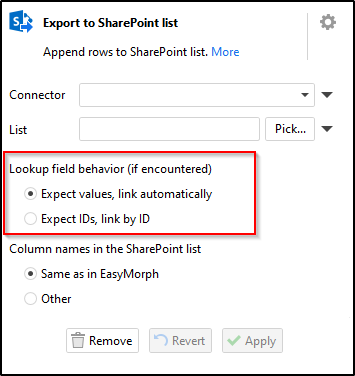 Thank you very much for the help ! i will test this out and implement it in our automation asap.

You are the best !
Kind regards,
Mihai