Theoretically, it may work if you manage to launch CLW from Server under a different Windows account (the one under which the VBA macro works).

You can try using the psexec Windows command to launch CLW from a Server task which, in this case, will have one action “Run program” with arguments something like (not tested):

I installed PsExec and when launching the “Run Program” action having EasyMorph Desktop open in the Server computer, it launches the other EasyMorph project through morph-cmd.exe correctly.

However, when I launch the task from EasyMorph Server, this is the reply I get from PsExec:

These are the arguments I’m using:

If I remove the Username and Password information from the Arguments, the process launches correctly even from the server, but once I add the username and password, I get error code -1073741502 from the Command Line Worker.

Do you know what could be the reason for this?

This allows me to run the psexec with the “-h” switch " (“If the target system is Vista or higher, has the process run with the account’s elevated token, if available”, more info: PsExec - Windows Sysinternals | Microsoft Docs):

However, if I launch it from EasyMorph Server (using the “-h” switch and having added the VBA User to “Log on as a Service” in the “Security Policy Settings”), it doesn’t work and I get this error:

I don’t know if I had to add the VBA User to the “Log on as a Service” Security Policy Settings, just trying possibilities…

I have also tried disabling the firewall temporarily if that could make any difference, but it didn’t.

@dgudkov Thanks for the heart ;), I’ve done a lot of research but I am completely stuck with this one…

Do you think I should be doing the arguments differently or a different Server configuration / user permissions?

UPDATE: I have found the following information regarding this error: 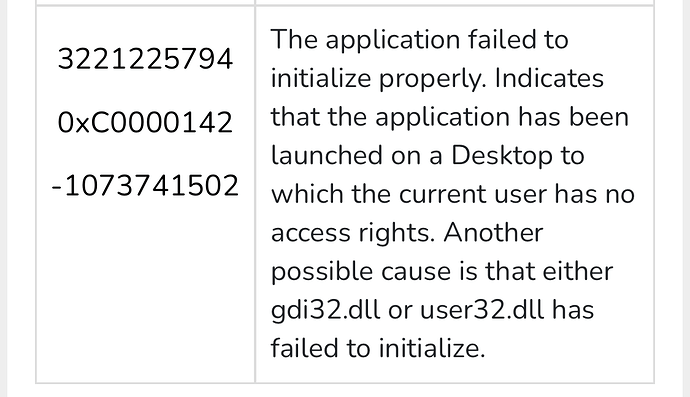 This looks like a VBA-related issue. I don’t see how EasyMorph relates to it.

Hello, it is not a VBA-related issue because this error was happening with a very simple project I was trying that had no VBA, it was just a project sending an email to myself to make sure it had been run.

The -1073741502 error is given by EasyMorph CLW when PSEXEC tries to run morph-cmd.exe as a user different from NT AUTHORITY/LOCALSERVICE.

EasyMorph doesn’t produce this error. It comes from Windows.

Then I guess the conclusion is that PSEXEC can’t run a task through CLW as another user when the initial task that triggered CLW was ran as NT AUTHORITY/LOCAL SERVICE (from Server), there is something that is not working… I don’t know either.

As I mentioned in a previous post, PSEXEC returns that CLW exited with a certain error (this error is returned by the command line execution):

Did you try running a simple project (e.g. generate a sequence from 1 to 10 and export into a text file) in CLW under psexec? Something that doesn’t require running VBA scripts or external apps.