Hi, is there a way to easily build client-facing app to upload / view data in easy morph? If I remember correctly there was a plan to add this in easy morph 5? Maybe I’m mixing things up…

Basically, we want to allow users to login and to upload some excel files and process in easy morph and present them with a nice dashboard to review parsed data. We can send them to EM server but unfortunately, EM server is more designed for technical users.

EasyMorph Apps is still on the roadmap. However, we will start working on them not earlier than the summer.

I would suggest a few options for your case: 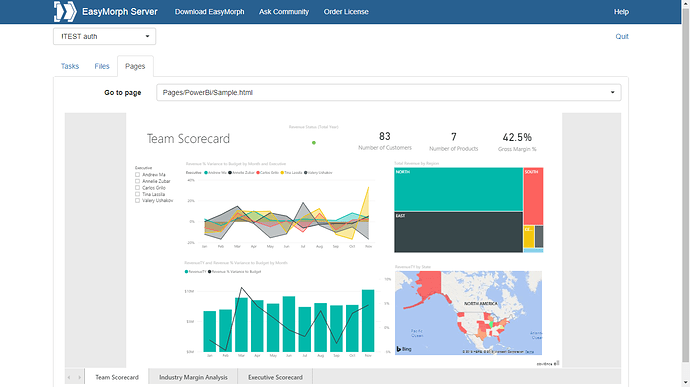 PS. Feel free to set up a call with me to discuss the options. You know my email

I’d like to know more about your vision for EasyMorph Apps. It’s the first I’ve heard of this and would be interested.

Interactive Apps will be a layer over the existing workflow engine. Basically, it’s a state machine where the nodes are screens with UI objects like tables, charts, and input fields. Tables and charts are based on the datasets calculated by the EasyMorph engine. Every edge is a module. Transitioning between nodes is done via modules.

This will make it possible to create applications with a workflow that depends on user input. For instance, show the user a list of regions (and a few charts with details on regions) and offer to select a region. Then, based on the selection, run a module and go to another screen. Then to another, and so on.

With the Interactive Apps, it will be possible to automate business processes, for instance:

I know that’s not much information, but the concept is still in the works and many details may change, so I would be reluctant to share them now.