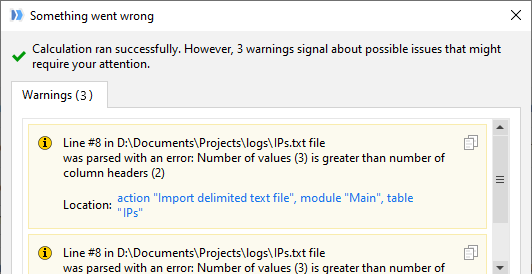 While warnings don’t cause projects fail, we recommend fixing the issues that trigger warnings and making sure your workflows are warning-free.

In the action settings, it is possible to make action fail on warning. In this case, a warning in that action will become an error and will cause the project fail. 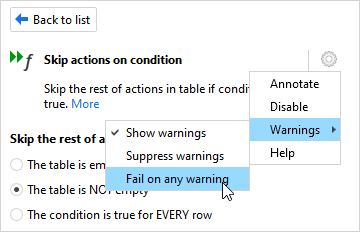 It is also possible to suppress warnings in an action, but we generally don’t recommend doing this and discourage warning suppression as a “lazy” way to get rid of warnings. If you believe a warning is not helpful - let us know (e.g. in the comments below).

Examples of warnings generated by EasyMorph:

If you have suggestions for warnings in EasyMorph, please feel free to suggest them in the comments below or in a separate topic in #feature-requests.

I’m surprised you did not mention this warning : calculation is not working for sevearl values inside column, or formatting is not working like on date, or “date is too old”. Generally speaking you could generate a warning when there’s a red label in the data. By the way I was going to propose this warning feature and I’m very happy it has already been thought.

Generally speaking you could generate a warning when there’s a red label in the data.

That’s a good suggestion, and we will implement it for some actions. Although, we won’t verify every single value in every action’s output as this would greatly degrade overall performance.

To facilitate checking columns/datasets for error values and wrong data types, we will be adding a new action - “Halt on data type mismatch” in version 4.5.

Hi
When you click on a warning, it disappears. Which is good .
But is it possible to reconsult them without doing a reload and run?

can you please elaborate on what you mean by “reconsult”? I’m not sure I understood.