It would be nice if the full path of the called morph file could be added to the output shown below.
This way I could create an overview of the relations between the different easymorph files that we use to load our data warehouse.
Is there a workaround that I can use ?

Another suggestion for this action is the following. I also want to make a mapping file of the tables of our datawarehouse (= parameter values in easymorph export actions) and the easymorph file that loads them. I can get a list of all easymorph projects that contain an “export to database” action and their parameter but the value of the parameter itself is not given in the output. However, it can be obtained doing another iteration using project metadata to call all parameters.

It would be easier if the parameter values are also shown when we list the actions. This would save a step. I don’t know if this is possible.
Also when parameters for the connection and table are used in export to database action, the two params are merged in one cell in the project metadata action. Maybe it would be better to show it in separate rows with an indicator if its a parameter for the connector or for the table ?

Version 4.6 will introduce dependency information for modules, groups, and tables. It will also be added to the “Project metadata” action. So it will be possible to see modules/projects called by a project module.

The same is true for using connectors - it will be possible to see for each module, group, table what connectors it uses.

Also when parameters for the connection and table are used in export to database action, the two params are merged in one cell in the project metadata action. Maybe it would be better to show it in separate rows with an indicator if its a parameter for the connector or for the table ?

You can split them into rows using the “Split delimited text” action, if needed.

Thanks ! I think I can apply a workaround for now. Very nice that the metadata action will be elaborated further.

I haven’t tested it yet thoroughly but it would be also very useful to be able to capture the “renames path” of variables from source to target. A challenge there is that sometimes we rename using the normal rename action, but sometimes we also use an external file to rename by lookup.
The “rename path” should capture both types of rename methods.
Any plans to add this in an action ?

Use case: create an automatic mapping table for the fieldnames from source to target for our datawarehouse.

I have been playing around with the table metadata action. I can see that it is possible to capture the original names and the final names of a table as depicted below.

However, I am looking for a way to grab that kind of result for each EasyMorph file without having to run the EasyMorph file per se. This would allow us to build the whole column mapping of our data warehouse.

So what I want to do is the following:

The purpose is to put that mapping table in the datawarehouse so that we can query it to see where things come from. 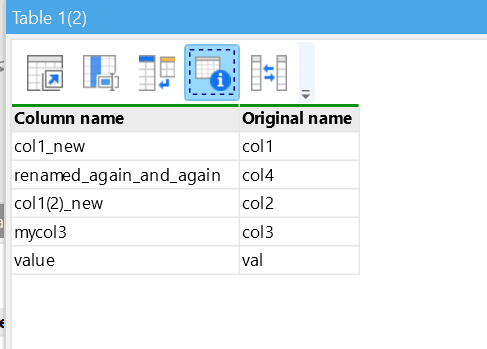 I’m not sure how this can be achieved in EasyMorph. As of now, column lineage in EasyMorph isn’t throughout. We track the column lineage starting from the action where the column was generated or imported. But not all actions can pass lineage through. For instance, if a column gets aggregated in the “Aggregate” action, it’s considered a new column. The previous lineage is disconnected.

As a suggestion, you can create derived tables at certain points of a workflow and use the “Table metadata” action to produce column metadata and export it into a database that collects workflow metadata. Then, after one run you will have the metadata collected. Can’t think of anything else.

Thanks for the info !