When you drop a column or remove a column from your database query, it’s highly possible that your next actions will be in error. Calculated column : if you are using the column in a calculation, you will have a problem there and it’s hard for easymorph to act on this => user must review his calculation.

But there are other actions where it would be possible to automatically adjust and that would be a very cool feature. And you would add more and more actions working like that.

Example : aggregation. I think it’s simple to adapt the aggregation action when a column is dropped, either aggregated or used in the aggregation. Other example : reorder columns. It’s really a pain to modify a reorder action. But in Excel when you drop a column, other columns on the right just adapt and move automatically on the left. Rename action : must be easy to just remove the column from the rename action.

What do you think ? I mean all these corrections must be done by a user but when you have a 100 actions project, you would be so happy that easymorph adapts itself !

And if you don’t want that correction to be automatic, you can propose it in the suggestions only. So user just have a clic to do

That works when you add a new column : propose to add it in the aggregation for example. But I think that’s more complex to deal with when a column is added. It’s more easy to do it when columns are removed.

I don’t think it’s possible to reliably understand the intent behind removing a column. A column may be removed because it’s no longer required, or because it was removed by mistake. If EasyMorph will remove columns on consequent actions automatically, the user may not realize it’s a mistake.

Note that it’s already possible to find all actions that refer to a particular column by using the “Find actions” dialog. The dialog is floating – you can click actions in it and review them, while the dialog stays open. Using “Find actions”, you can estimate the impact of deleting a column before deleting it. 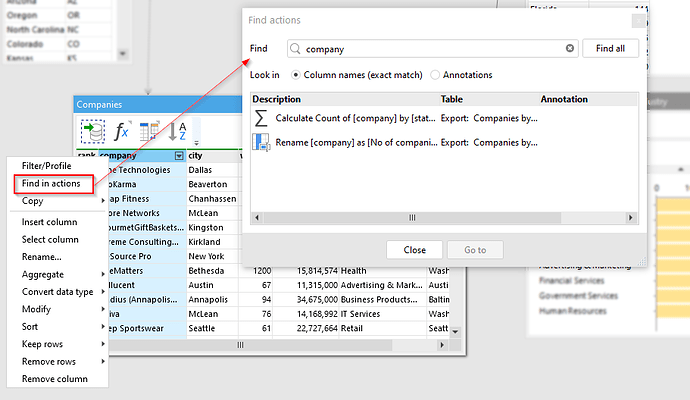 So why not using my idea about “suggestion” => when an action is failing with error, do you think there could be an easymorph diagnostic to identify missing columns and propose automatic fix ?

If an aggregate function is failing, would it be possible to identify that there’s a missing column and in consequence, propose a fix to remove this missing column ? For several actions I think it’s not difficult.